WHEN RAG BECOMES A DRAG THE CHOICE IS A CHOPPER PUMP 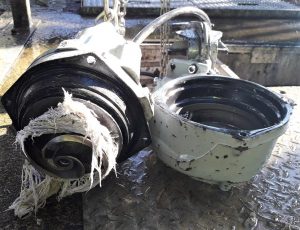 Heavily laden unscreened sewage containing rag and other debris occurring at pumping stations, is acknowledged as being one of the toughest challenges for pumps, particularly when the site is subject to low flows and slack gradients. This situation was occurring at a submersible foul pumping station near the Sinfin Golf Course in Derby, a Severn Trent Water facility. The pumping station was constructed as part of a major project to alleviate flooding in a residential area in Sinfin. The incoming sewer used to be a 1250mm trunk sewer and as part of the project the main flow was diverted away and into a new trunk sewer. However, the existing trunk sewer had to be retained to serve a smaller number of residential properties as it was not practical to relay this sewer due to access difficulties.

Severn Trent Water was using pumps with different types of impellers and these were unable to cope when large amounts of rags were washed into the pump well after storm conditions. Following each storm the volume of rags arriving at the pumping station was such that the existing solids handling pumps could not cope. Over pumping had to be arranged to protect against the potential flooding of local properties, whilst the failed pumps were lifted and unblocked.

4 months later and following 700 hours of operation the Vaughan Chopper Pump has not blocked, even after storm flows and high volumes of ragging occurred. As a result, call out charges and the associated maintenance costs have been eliminated.

When the Chopper pumps were inspected as part of routine maintenance no wear has been found since installation, even though normal amounts of grit were present. Severn Trent Water acknowledge the performance of the Chopper pump and it’s ability to meet the challenges arising from storm flows and large amounts of rag, when all other options had failed to cope with the conditions. STW have also installed Chopper pumps on 2 other similar sites following the inability of other types of solids handling pumps in dealing with high volumes of rag and debris.

Through their experiences at numerous installations, P&M Pumps have been able to demonstrate that Vaughan Chopper Pumps can bring significant cost-savings. In most cases, retrofitting a Vaughan Chopper Pump into a problematic area improves the whole process and will be self-financing, with payback periods of less than one year, thereafter minimising the effect to the budget holders.

Further information on Vaughan Chopper Pumps and associated mixing systems is available from;