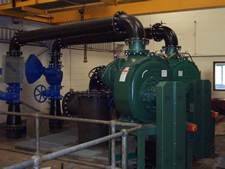 Pumps of all shapes and sizes can be looked upon as the beating heart of the UK wastewater treatment process, especially when recurring storm events lead to increased volumes of rag and debris entering the system. This is when specific solids handling capabilities become ever more critical. So get the right pump in the right place at the right time and the expense and inconvenience of pump failures can be minimised. An ongoing example of reliable pumping performance with VAUGHAN is at a Thames Water Banbury.

HEAT EXCHANGER RE-CIRCULATION IS THE KEY TO CONSTANT TEMPERATURES

Mixing and recirculation is one of the most critical stages in maximising the efficiency of today’s Anaerobic Digestion (AD) processes. Pumped dual zone technology is established as the preferred choice of AD mixing systems at numerous waste water sites across the UK. A recent example of this is the supply of 4 x Vaughan model HE8K-305 55Kw horizontal end-suction chopper pumps for the expansion project at Yorkshire Waters’ Huddersfield ERF plant for digester heat exchanger re-circulation. This follows successful ERF projects at Blackburn Meadows, Sheffield in 2012 and Knostrop, Leeds in 2017, where Vaughan Chopper pumps were selected for similar duties. 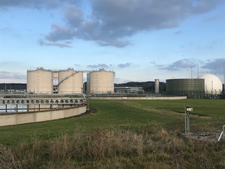 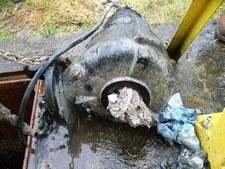 WHEN RAG BECOMES A DRAG…THE CHOICE IS A CHOPPER PUMP

4 months later and following 700 hours of operation, no blockages have occurred, even after storm flows and high volumes of ragging.

Watch Severn Trent Waters own produced video, click the”play” button on the video to the left.

P&M Pumps once again demonstrated that their products and expertise can bring significant cost-savings. In most cases retrofitting Vaughan Chopper pumps into situations where others have failed is almost self-financing, with payback periods of less than twelve months. Optimum system efficiency and cost reduction is the marathon not the sprint.

Achieving significant improvement in the throughput of sludge combined with minimising reactive maintenance and the frequent need to purchase spares, were the important benefits achieved at a key Southern Water site, thanks to the installation of Vaughan Chopper Pumps and mixing systems, supplied by P&M Pumps. The site, a key element in Southern Water’s sludge strategy, serves a sludge catchment of approx 600,000 people and uses Mesophilic digestion and a thermal drying plant which needs to operate on a 24/7 basis. 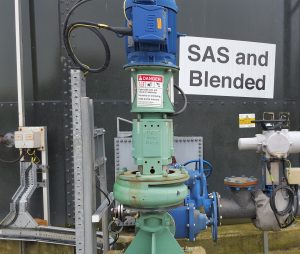 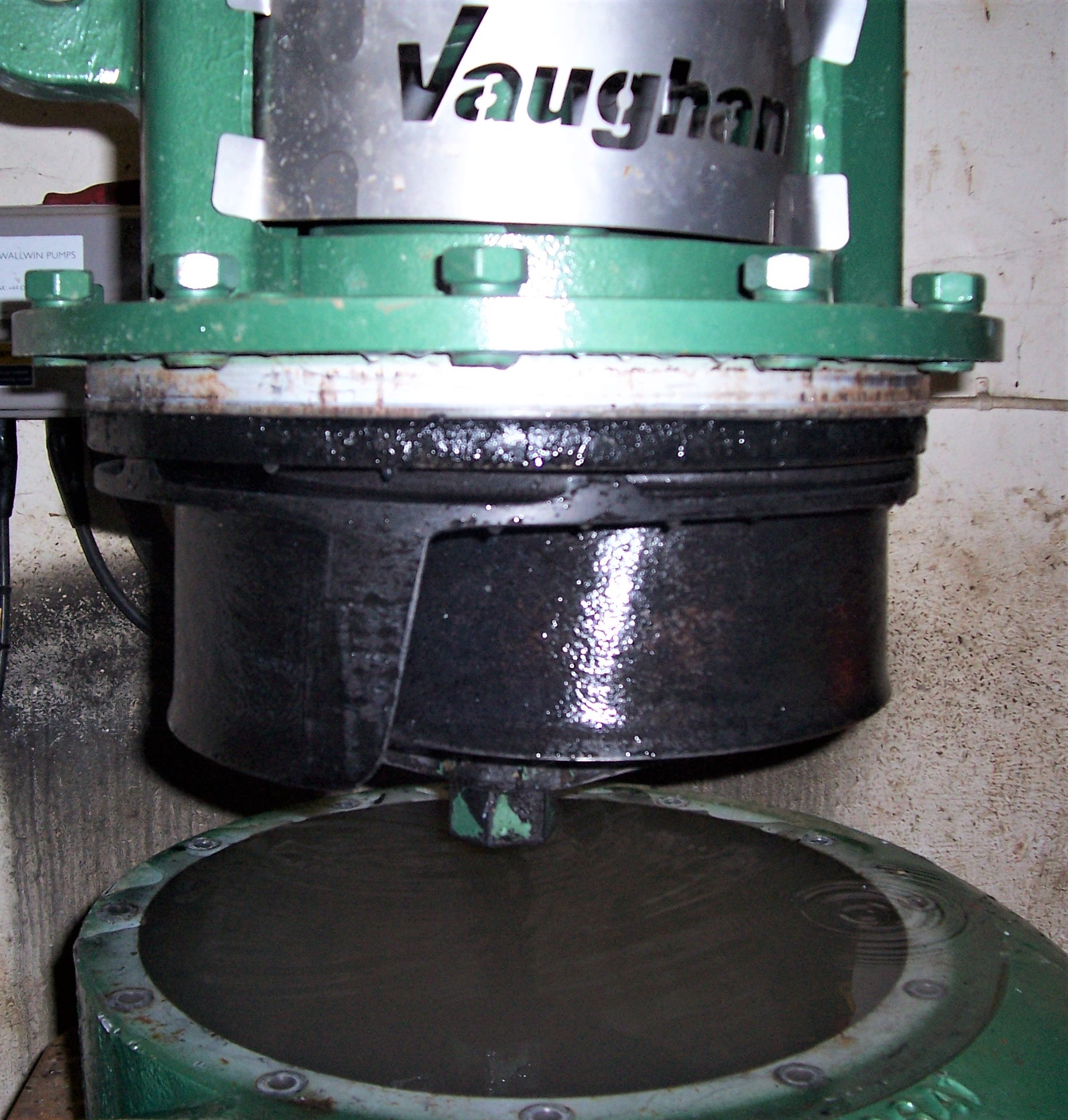 Chopper Pumps go through the motions at Anglian Water

Another successful installation of Vaughan ‘Chopper’ pumps has resulted in a significant reduction of the regular pump blockages occurring at a main Anglian Water pumping Station in Huntingdon, Cambridgeshire.

The Hartford Road Pump Station in Huntingdon is one of a number of facilities within the Anglian Water Region where raw domestic and industrial effluent is collected and processed, with raw sewage being transferred within a dry-well pumping application.

Problems arose, when during high flow conditions, the original pumps became blocked with fibrous rag material and other flotsam contained in the sewage streams. These problems were particularly severe when storm conditions occurred which led to sewage streams backing-up, causing spillage and flooding. Blockages were an on-going problem, with around 2 to 4 pump failures a week during extreme conditions, resulting in high maintenance and labour costs.

The Hartford Road pumping station has been operating for 2 years without the need for any unscheduled visits due to pump failures. In addition the hydraulic performance of the Vaughan pumps exactly meets the target flows set by Anglian Water, with no drop in performance. Commenting on the pump’s performance AW have said, “We have overcome all of the operational problems we were experiencing, pump failures due to ragging etc. have been eliminated and we appreciate the pump’s ability to handle rag matter easily and efficiently”. He added, “P&M Pumps offered a guarantee from the outset that these pumps would not block and they have proven reliable within a very difficult application”.

The ability for pumps to operate efficiently, even during storm events and surges where abnormal high flows occur, is an essential requirement in many waste water and effluent treatment applications. Critical periods are when the increased rag or other heavy debris is washed down into the mains which often cause pump failure resulting in expensive downtime. This situation was one of the factors leading to the reengineering and upgrading of another Anglian Water pumping station facility.

The Anglian Water One Alliance facility at Garrison Road in Great Yarmouth collects raw domestic and industrial effluent prior to treatment, as part of the screening and transfer process from pumping station to works. A Vaughan auto self-priming SP10R Chopper pump was supplied and installed for transferring rag matter from a collection sump adjacent to a storm screen into a gravity main leading to the local sewage treatment works. Prior to the upgrade, Anglian Water had relied upon maceration and this lacked the required performance, for example, falling short of the flow targets required for the downstream process.

Commenting on the installation and subsequent pumping performance. The  Site Engineer at Garrison Road confirmed, ‘The operational problems we were experiencing with maceration within the transfer process have been eliminated, thanks to the Vaughan Chopper pump’.

He continued, ‘The pumps ability to handle rag matter easily and efficiently was crucial to our selection and an added bonus is that the pump does not macerate solids and rags, it only chops what it need to chop to stop the pump from clogging’.

He concluded, ‘The pumps performance has provided the benefit down stream as inlet screens can now remove far more material than the previous system allowed’.

• Since its original construction and up to 2013, the sewage pumping station was a typical set up of a wet well with two 22kW submersible pumps. 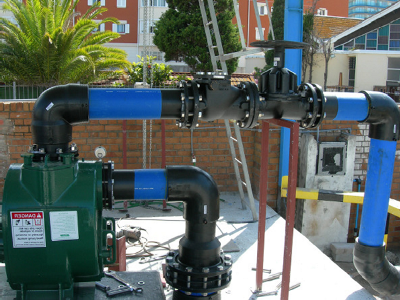 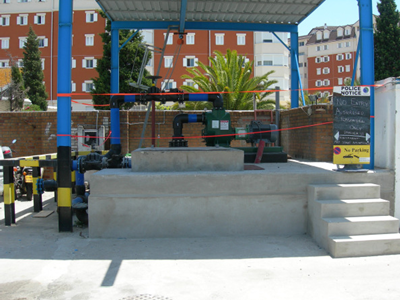 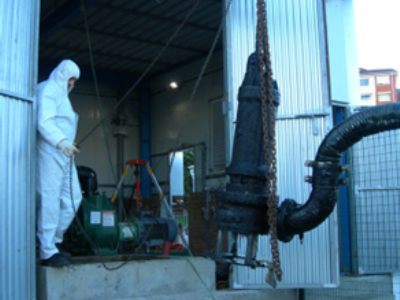 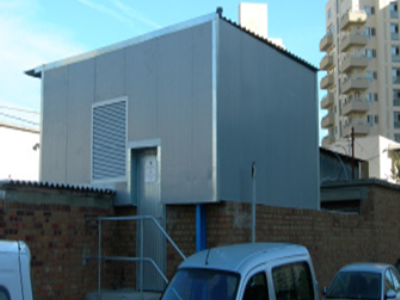 • The project started in 2012 and was completed 2013. It was then again proven that Vaughan Pumps were the solution for Aqua Gib Ltd .

• In October 2017, HM Government of Gibraltar announced a major project to transform education in Gibraltar. The project was to relocate eight schools and refurbish four existing ones. Among the announcement were two purpose building for co-education comprehensive schools in the Waterport area.

• Building the new schools in the Waterport area meant that Varyl Begg Sewage Pumping Station, had to be either relocated or built an all-new pumping station within the school. 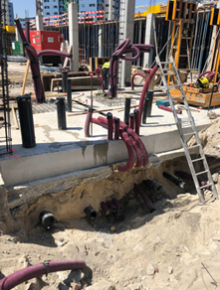 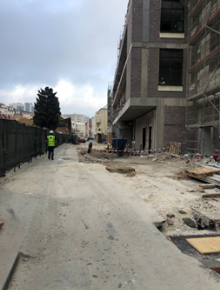 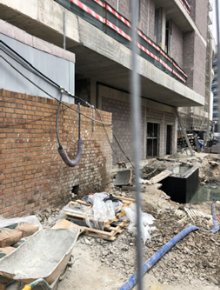 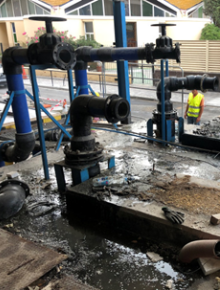 • This was a very challenging project with many hurdles to be jumped, as the new station needed to be finished well before the start of the new term in 2019. Once again Aqua Gib Ltd opted to install two Vaughan SP6K chopper pump. 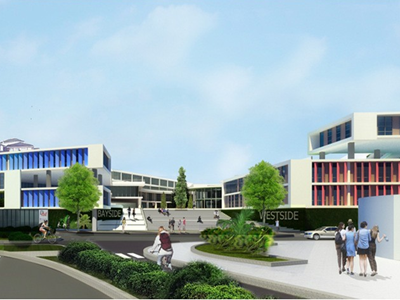 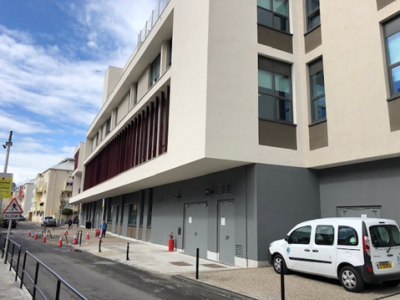 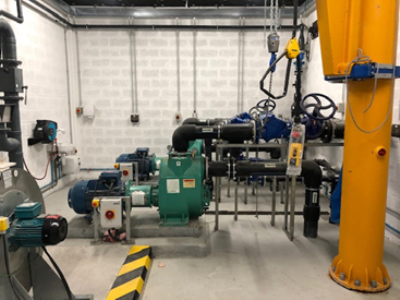